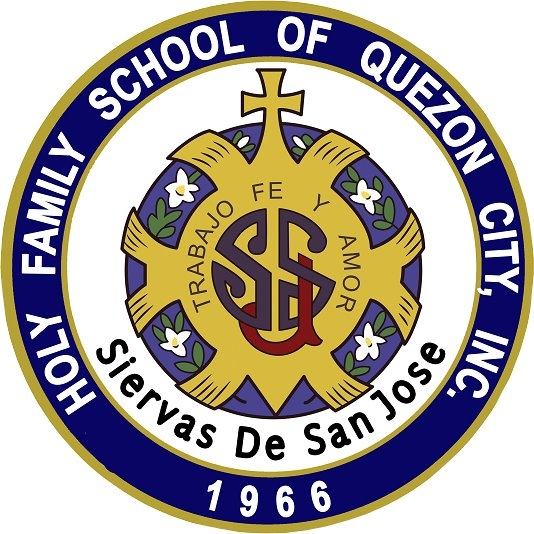 The Siervas de San Jose (SSJ) arrived in the Philippines in 1932 and had their first foundation in San Jose de Buenavista, Antique where they had a dormitory and a pre-school. A year later, they established St. Theresita’s Academy in Silay, Negros Occidental. As local vocations increased, the sisters expanded their presence in the different parts of the country. It was in 1959 when the SSJ, being known to run successfully Colegio de Sta. Rosa School in Intramuros and Makati, were invited to put up a school exclusively for girls. Through Mo. Maria Valentina Ayerra, SSJ, then superior of the Holy Family Dormitory, Manila, a lot was acquired in U.P. Village, Quezon City, which has become the site of Holy Family School of Quezon City, Inc.

Inspired by the desire to share the SSJ Charism through education apostolate, Holy Family School officially opened on July 11, 1966 with two classrooms furnished for fifty Kinder 1 and Grade 1 pupils, which was a combination of boys and girls. The boys were accepted for pre-school until mid-80’s but it was discontinued due to the limited number of classrooms and the priority given to girls.

Holy Family School supervision was pioneered by Mo. Carmen Enriquez, SSJ, the first Superior, and Sr. Jacinta Salazar, SSJ, the first School Principal. They were assisted by Sr. Ma. Flora Perez, SSJ and Sr. Filomena Cabrera, SSJ with two lay teachers: namely, Miss Teresita Origenes and Miss Elma Tuzon, who later joined the Congregation. Within the first decade of its foundation, the school progressively grew both in size and in its mission. From its second year of existence until 1974, HFS extended its services to Barrio San Vicente and Barrio Capitol Site.

At San Vicente Barangay Hall, there was the Holy Family School Branch wherein girls from the place were enrolled in the Kindergarten program and had regular classes and catechism. Medical outreach was also provided by the HFS Doctor and SSJ Novices. Part and parcel of the SSJ school apostolate is the promotion of the poor working world which was initially concretized in assisting the families of HFS workers who were housed within the school compound and in providing educational assistance to students from poor families. HFS also offered vocational courses for “yayas” of pre-school pupils and other helpers who wished to learn how to sew. By 1975, the school’s main building was completed into its present structure. In the same year, a house was built within the Sisters’ compound where working girls and some faculty members of HFS lived and formed a Christian Community.

From being a Delegation dependent on the Province of Spain, Holy Family Province, was born in 1981. More steps geared towards the promotion and the evangelization of the poor working world, especially poor women and young at risk, were given emphasis.

HFS curriculum integrated outreach programs: where fourth year catechists would go to Pinyahan Elementary School and Flora Ilagan High School with Parish Involvement as part of the CLF Program. Other programs and activities were imbued with and based on the Nazareth spirituality.

From 1987-1989, the school offered free late afternoon classes for High School working boys and girls and other students from poor families. This program was carried out successfully with the help of HFS Teachers who volunteered to render their services. In 1989, due to lack of facilities for boys in this Night Classes, the admission was limited only to girls who were eventually integrated in the regular classes.

In celebration of the HFS Silver Jubilee foundation in 1991, the school revitalized and expanded the Educational Assistance Program (EAP).

For two years, the program included Shop Class and Income Generating Projects to enable recipients and their families to help themselves economically.

On November 18, 1992, Holy Family School acquired its status as a Corporation.

The school embarked on its process of redirection in 1993. The School’s Vision-Mission was aligned to the Mission Statement of the Holy Family Province, including its policies and programs with the goal of attaining its apostolic mission and rendering faithful service to God, the Church and the country.

Simultaneously with this major paradigm shift, additional buildings were constructed, including the Technology and Livelihood Education (TLE) Building which houses on its first floor the Homemaker’s Room, Mo. Bonifacia Sewing Room, and Cooking Area, and on its second floor – Fr. Butinyà Media Center and Computer Laboratory rooms. Candle-making was introduced as an income-generating project to support the assisted students and courses on Cosmetology and Dressmaking were offered to outsiders who were interested to be equipped with these skills. In terms of infrastructure at this same period, additional auxiliary rooms and venues were built and fixtures were provided: the Covered Court and the Covered Stage, life-size wooden carved images of the working Holy Family, and other significant Catholic icons located in the different strategic places of the school.

The process of redirection towards the poor working world, called for by the SSJ Charism, took many forms and expressions. There was even an attempt to sell the school in the year 2000, to live radically the SSJ Charism and their preferential option for the poor. However, after exploring possibilities of selling the school and at the same time, considering the consequences affecting all the employees, the SSJ opted for lay empowerment. In the School Year 2002-2003, Mrs. Nela C. Wei was designated as the first Lay Directress. Together with her in the key positions were lay administrators and coordinators, except for the Office of the Christian Life Formation Coordinator, which was delegated to an SSJ sister. This new group of lay administrators were accompanied by Sr. Amor R. Calingasan, SSJ and Sr. Lourdes T. Tacpalan, SSJ as School Consultants. From this period until 2012, major improvements of school facilities were done such as: the provision of Speech Laboratory, upgrading of the Science Laboratory, renovation of the Audio-visual Room into a fully air-conditioned St. Joseph Hall, renovations of Academic Offices, School Canteen, Maintenance Quarters, Guidance and Testing Center, and the Waiting Area.

In 2013, upon the retirement of Mrs. Wei, Mrs. Teresita-Arcos-Surot was appointed as the new Directress with her team of lay administrators. The enactment of the Enhanced Basic Education Law of 2013 propelled the additional two years in the Basic Education. Its implementation brought challenges and opportunities for the institution to flourish. In April 2014, Holy Family School of Quezon City took the bold step of implementing the Differentiated Summer Bridge Program as a transition initiative to shorten the additional two years of Basic Education into one year and one summer. This led to the opening of Senior High School one year ahead of the Department of Education’s timetable.

This new educational landscape required the development of physical resources and updating of technological facilities. The construction of Fr. Butinyà Science Centrum gave space to the General Science Laboratory, Biology Laboratory, Chemistry Laboratory, Physics Laboratory and a dispensing room. The Child Study Center was constructed for Kinder 1 to Grade 1 Classrooms giving way for the Senior High School to be accommodated in the main building. The School has remained faithful to its mission to provide assistance to the economically and socially challenged students and families through the St. Bonifacia Scholarship Program.

The Christian Life Formation (CLF) Department leads the whole school community in extending services to the Immaculate Heart of Mary Parish (IHMP) and in reaching out to the neighboring communities through various services, such as: regular tutorial and feeding, with catechism, by the HFS Students/Advisers to young boys and girls in the adopted communities of the two Barangays, C.P. Garcia and Botocan, both under the IHMP; helping build houses for the blind; teaching livelihood education to women; and other services. HFS Faculty and Staff involved themselves as Choir every fourth Sunday of the month in the Parish.

With one heart, one soul together, HFS celebrated its Golden Founding Anniversary in 2016 with the Theme: 50 years of Life and Mission.

Holy Family School of Quezon City has striven to be a true reflection of its dictum – Trabajo, Fe y Amor (Work, Faith, and Love) as it continues to move forward to live up to its name and be faithful to its mission, making education as means to develop women servant leaders upholding the Nazareth values 50 years and beyond.